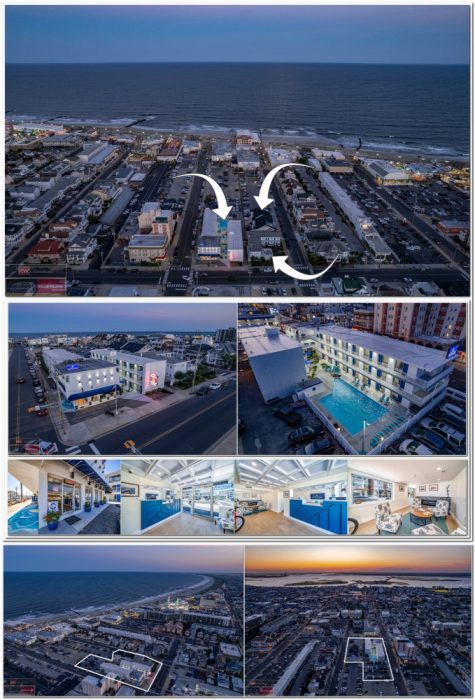 The Pavilion Motor Lodge, Fountain View Motel and an adjacent apartment building in Ocean City have all hit the market, with the three parcels combined listing for $16 million.

The property spans about an acre on the 800 block of Atlantic Avenue, located a block off of the beach in the Jersey Shore town. The Pavilion has 58 rooms, the Fountain View has 19 and the Moorlyn Terrace apartment building has eight units. The parcels are also being sold separately — with the two hotels listed together for $10 million and the apartment building separately for $6 million.

The sellers have already secured site plan approvals for demolition and redevelopment from the Ocean City Zoning board. The approved redesign sits on the entire footprint of the three-parcel property and calls for 35 three-bedroom, three-bathroom condo units. In order to obtain the permit, the buyer would have to buy the entire property for $16 million.

Listing agent Kristina Doliszny who has sold Ocean City properties like the Atlantis Inn and the Scarborough Inn, said that the town is “very interested in redevelopment of the 8th Street corridor.” She added that with the property “teed up and shovel ready” it would be easy for a developer to purchase the space, follow through with the approved plans, or design their own.

A rendering of the proposed and approved redevelopment.

“It’s a needle in a haystack to find large parcels of property on New Jersey’s barrier islands, especially the high-income ones,” Doliszny said about the property. “You’re not going to be able to get a property this big on the beach block, steps from the boardwalk almost anywhere else in New Jersey.”

The three parcels also sit in a hospitality zone, which allows for and prioritizes high-density developments like hotels, motels, restaurants, mixed-use and multifamily developments. The property also includes a restaurant, Brenda’s Cafe, a leased space at the bottom of the Pavilion which operates separately from the motel.

Current owners Brothers Raj and Yogi Khatiwala bought the four-property parcel in 2019 and put “significant work into it,” Doliszny said. The duo owns other hotel properties in New Jersey, as well as other states, and is selling to “diversify their portfolio” Doliszny said. Before the Khatiwalas, the Pavilion was owned and operated by the Capizzi family, who owned it since the 1960’s, according to Doliszny.

Though Doliszny, who previously owned and operated the Atlantis Inn, thinks the lot would be highly coveted among developers, there is also a high value for hotels in Ocean City.

“Over the course of last five to 10 years, there has been an exponential exodus of hotel properties in town because they’ve sold to developers and turned them into residential condo buildings,” Doliszny said. “There’s a need to have hotel rooms to support Ocean City’s tourism. There’s a tremendous need, for overnight hotel stays, the inventory is depleted to very little, but there’s still a huge demand.”

Doliszny recently brokered the sale of Ocean City’s Tahiti Inn, whose buyers were intent on selling to a hotelier who would keep the operation running. That may have tempered interest from developers, but the longtime Ocean City Realtor said she still had 56 qualified interested buyers that signed non-disclosure agreements to explore a purchase of the hotel. She expects interest in the Pavilion to be the same if not more.

The Pavilion Motor Lodge and the Hotel Fountainview have roots that trace back to 1955. As motels grew in popularity and began making their way to the Jersey Shore, Ocean City passed an ordinance banning them within city limits. Businessman Francis H. West, in defiance of the ordinance, built Hotel Fountainview, dubbing it a hotel but building it with a traditional motel style. He went as far as advertising it as a “MOdern hoTEL,” emphasizing ‘motel’ in the ad, according to the hotel’s website. The two-story structure has 19 rooms with exterior walkways and a parking lot just behind each room.

In 1963, the Pavilion Motor Lodge was built and opened adjacent from the Hotel Fountainview. The Pavilion, with its recognizable seahorse logo, includes two buildings standing three stories high, with a total of 58 rooms and restaurant space below.

The Pavilion Motor Lodge is one in a growing list of iconic Ocean City businesses set to change hands or close operations. The Tahiti Inn Motel and Apartments went up for sale in June after being in the same family for 33 years, Italian takeout spot Voltaco’s is closing in October after 68 years, Ward’s Pastry will close Sept. 18 after 98 years and OC Surf Cafe is set to close after 10 years.

Here is a link to the original story:  Ocean City motels, adjacent apartment building approved for redevelopment list for $16M