Getty Images
Trader on the floor of the New York Stock Exchange.

Stocks are at record highs and Wall Street is getting feverishly bullish. What could possibly go wrong?

While many analysts really don’t see much that could derail the market’s bull run between now and the end of the year there are some warning signs that investors seem to be ignoring.

For some bulls, the debt ceiling debate and government shutdown were a blessing in disguise because they pushed back expectations for a tapering of the Federal Reserve’s easing program into next year, meaning lower Treasury yields and sunny skies for stocks. That and the seasonal high that usually drives stocks at the end of the year created a launch pad for optimism around U.S. equities.

We found five warning signs, though analysts say they do not mean the market will necessarily change course soon.

Investors may be getting a little too bullish and bearishness is fading fast from the market, a contrarian signal. The American Association of Individual Investors’ (AAII) sentiment survey Thursday showed the lowest amount of pessimism about the market in 21 months, and the highest optimism in 10 months.

Bearish sentiment, or expectations stocks will decline over the next six months, fell 7.3 percentage points to 17.6 percent, the lowest reading since January, 2012. Bearish sentiment has fallen below its historic average of 30.5 percent five times in seven weeks.

Bullish sentiment rose 2.9 percentage points to 49.2, the highest level of optimism since January 24, and the fifth time in seven weeks that bullish sentiment was above its historic average of 39 percent.

“In the short term, the market is dramatically overbought. From that perspective, the market could flame out but who knows when and at what level,” said Peter Boockvar, chief market analyst at the Lindsay Group. “The boat is very full, and nobody sees dramatic harm for the market no matter what. On top of the market being overbought, earnings growth is two to five percent.”

Hickey said the argument in favor of rising valuations is that the low interest rate environment means stocks should have a higher valuation. “One of the most bullish arguments in favor of the market is valuation. That argument is gone now. We’re not by any means at the extreme. The S&P 500 is about average now,” he said.

Earlier in the week, momentum stocks took a sharp and sudden hit, starting with a dramatic selloff in Netflix, one of the hottest momentum names. It was later reported that investor Carl Icahn sold a big chunk of his Netflix stake. The selloff across dozens of momentum plays was broad as stops were triggered and shorts were forced to cover. It reminded some traders of the flash crash. 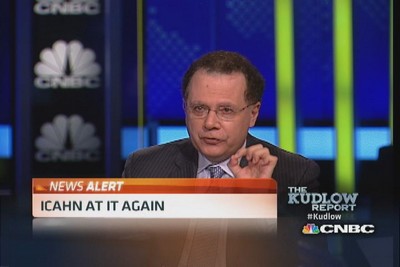 “I think that’s potentially a canary for the market,” said Boockvar.

“The NDX (Nasdaq 100) is 13.3 percent above its 200-day moving average. Anything above 10 is stretched. Probably tomorrow on Amazon.com and Microsoft (which reported earnings after Thursday’s close) they’ll be very much higher,” Boockvar said. “In this kind of market you can stay stretched for longer than usual. It just tells you you’re in a high risk market.”

Just as momentum stocks had a temporary blowout, some big name stocks are seeing outsized gains—another warning sign, says Boockvar. Google galloped above $1,000 a share last week on good earnings news, while Amazon was up more than 8 percent and Microsoft more than 5 percent on earnings news after the bell Thursday. Zynga also jumped 13 percent when it reported a narrower loss.

(Read more: Overbought? No sweat, thanks to ‘Bernanke-care’)

“I get nervous when I turn on the TV, and everyone’s talking about four digit stocks and Carl Icahn is tweeting,” said Mark Newton, chief technical analyst with Greywolf Execution Partners. Icahn this past week tweeted about his sale of half his Netflix holdings and also about his letter to Apple CEO Tim Cook, seeking a stock buyback.

At the same time, some other names in tech were clobbered after they reported earnings, a warning that an important group representing growth is not seeing smooth sailing. Symantec, F-5 Networks, and Akamai were all slammed after earnings disappointments this week, and one of the biggest bombshells of the earnings season was IBM, which has held back the Dow’s gains.

“I’m a little more negative in the short run. I think stocks are showing some signs of peaking out. I expect them to pull back between now and mid-November before we get to move higher,” said Newton.

Newton said another problem is that the financials have tripped up and aren’t showing the leadership they should. Investors this week were again loading up on defensive names, particularly telecoms and utilities. That play also attracted investors hunting yield in strong dividend payers, as bond yields declined.

(Read more: The most widely held stock in mutual funds is …)

He also said it’s a negative that the Dow Jones Industrial Average, representing 30 blue chip stocks, is lagging and has not made the new highs seen in the S&P 500, Dow Transports and Russell.

Newton said in a note this week that 10 stocks in the S&P 500 have returned over 90 percent, and two—Best Buy and Netflix—were up more than 250 percent. Other high fliers include Micron Technology, Delta Air Lines, Boston Scientific, Celgene, and Safeway. The S&P 500 is up 22.9 percent year-to-date. Newton said lagging sectors can pick up late in the year, and stocks like gold miners could be poised for improvement.

“Stocks like (J.C. Penney) JCP, (Newmont Mining) NEM, (Cliffs Natural) CLF, (Teradata) TDC, (Peabody Energy) BTU, (Abercrombie and Fitch) ANF have all fallen shown performance of -25 percent or worse this year. Often times as we reach mid-November we begin to see signs of mean reversion where the past year’s biggest laggards start to outperform and vice versa,” he noted.

Investors are piling on record debt to buy stocks at record highs, according to new data on the margin accounts of the NYSE Euronext member firms. The data show that margin debt, used by investors to buy securities, climbed to a new record of $401 billion in September. That was 4.8 percent higher than the previous month.

“That’s another warning,” said Boockvar. “Prior to this cycle, it peaked in July 2007 and before that it peaked in March 2000, and you know what happened next.”

None of these warning signs alone mean a big selloff is coming, but the complacency that the market will continue to rise is running high.

He said there are some warning signs but stocks could still go up. “It gets your antenna up, but it’s not a clear signal in itself. I think we need to get past earnings season and see what happens,” he said.