U.S. single-family home prices rose in May, though the pace of gains cooled compared to the month before, a closely watched survey showed on Tuesday.

The S&P/Case Shiller composite index of 20 metropolitan areas gained 1 percent on a seasonally adjusted basis, shy of economists’ forecast for a 1.5 percent increase. That marked a slower pace from April’s 1.7 percent rise. 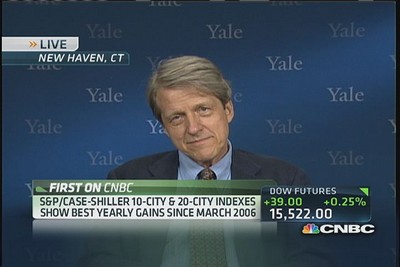 Play Video
Case-Shiller Index shows best gains in 7 years
Robert Shiller, co-founder of the Case-Shiller Index, breaks down the latest numbers on housing and which cities are “bubbling up.”

Compared to last May, prices also fell short of expectations, rising 12.2 percent from a year earlier. Still, it was the biggest annual gain since March 2006, matching a record set in April.

The report was unlikely to alter economists’ views that the housing sector continues to recover, making it a bright spot for the economy.

“The cities that bubbled in the past are bubbling again,” Robert Shiller, economist and co-founder of the S&P/Case-Shiller Home Price Index, told “Squawk on the Street” Tuesday.

“To me, it seems to be at least partly psychological. They’ve seen it before and they’re ready for it again … It seems like California has historically been the most bubbly state in the country and it continues.”

Shiller said that the new factor emerging in the numbers is the effect of institutional investors on home prices. “They’ve learned about momentum and they’re saying ‘hey, this is it.’ The housing market is showing a lot of upward momentum. And you know, I think they’re probably right, at least for the short term.”

“For a flipper who can get out in about a year, it seems to be a fairly safe bet,” he added.

All 20 cities rose on a yearly basis, led by a 24.5 percent surge in San Francisco.