US Economy should grow at 3-4% This Year. 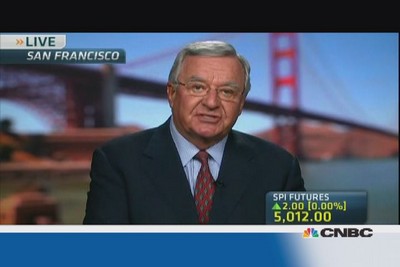 Play Video
Ex-Fed governor: Summers won’t control FOMC
Robert Heller, Former Governor at the U.S. Federal Reserve from 1986 to 1989, describes why he thinks Lawrence Summers would be the wrong choice to replace Bernanke, and why the U.S. economy is falling short of its potential.

The U.S. economy has the ability to grow at a rate of 3-4 percent if policy makers removed the constraints obstructing its potential, former Federal governor Robert Heller told CNBC on Thursday.

Heller’s comments follow better-than-expected gross domestic product (GDP) figures on Wednesday, which showed the world’s largest economy expanded 1.7 percent growth in the second quarter from the year before, exceeding expectations of a 1 percent rise and an increase on the first quarter’s downwardly revised 1.1 percent.

“We may be out of the woods, but we are [still] walking in a mud field,” said Heller, who served on the Fed’s board from 1986 to 1989 under President Reagan.

“We are stuck in a range of 1-2 percent growth, which is not where we should be. If you would take some of the constraints off the U.S. economy, it could be growing a lot faster at 3-4 percent,” he added.

Heller said one of the key constraints was restrictions on drilling activity on government-owned land which has prevented oil and gas companies from expanding at the pace they should be.

He also said the U.S. economy had a number of untapped resources, including the large amount of unemployed people, together with hoards of corporate cash holdings sitting on the sidelines.

“U.S. corporations have the largest cash holdings they have ever had, so the potential for growth is there but you’ve got to let it happen and not restrain it,” he added.

On the ongoing debate over when the U.S. central bank might scale back its $85 billion a month bond buying plan, which has kept markets transfixed since Fed chair Ben Bernanke first suggested it was on the cards in May, Heller said he expected tapering to commence in December, later than the broad consensus forecast of September.

“Probably the current Fed will want to do so [start tapering before the end of the year] so the new Fed chief who will take office at the end of January next year will not have to change policy at the first meeting,” he added.

Speculation has been rife over who might replace Bernanke when his term expires, with vice chair Janet Yellen and former Treasury Secretary under Clinton’s administration, Larry Summers, emerging as possible candidates.

Heller voiced concerns over whether Summers would be the best person for the role.

“Summers clearly is a very bright man but he also speaks his mind and he’s not exactly known to be the great consensus builder that Bernanke has been in his time,” he said.

“He might have a harder time holding the Federal Open Market Committee (FOMC) together… if you were to get more dissent that would make policy making more difficult,” he added.

Heller told CNBC in June that Yellen was the most credible candidate for the job.